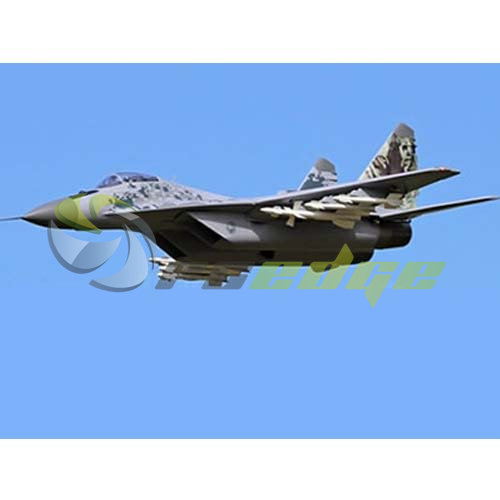 Freewing first established the Twin 80mm class of EDF jets with its popular F-14 Tomcat and then the A-10 Warthog, and now we are proud to announce the Freewing MiG-29 Fulcrum! Represented in 1/9 scale, this large aircraft is 1878mm (74”) long with a 1257mm (50”) wingspan, powered by dual inrunner 80mm EDF power systems. The Mikoyan MiG-29 first entered service in 1981 and continues flying in the air forces of 26 countries in 2020.

To further set itself apart in your favorite EDF fleet, the Freewing MiG-29 arrives with a stunning five tone "Digital Thunder" camouflage livery in service with the Slovak Air Force.

Set yourself apart from the crowd with this meticulously factory-finished Digital Camo livery, which makes an ideal counterpart to the Fractal Camo and Splinter Camo available on the Freewing 70mm Su-35.

At nearly 75 inches in length, the MiG-29 boasts an impressive presence and size! Its 1/9 scale is similar to our Freewing L-39 Albatos, T-33 Shooting Star, MiG-21 Fishbed, and others., making the MiG-29 a perfect flight line companion... or opponent!

The Freewing MiG-29 was developed with high scale fidelity in mind. In photos it's difficult to tell the model from the real thing.

Pre-upgraded out of the box by popular customer request, the MiG-29's twin 3658-1920kV brushless inrunner motors and 9-blade fans can propel this large 1/9 scale model to speeds approaching 120mph, yet also have the thrust and efficiency to deliver confident acceleration out of slow speed maneuvers. This "fan-favorite" 80mm Inrunner power system is beloved in customers' other Freewing jets including the popular T-33 Shooting Star, L-39 Albatros, Avanti S, A-6 Intruder, and Mirage 2000.

Twist-and-Turn main retracts and servo-driven gear doors conceal the main wheels inside the wing roots for improved aerodynamics, delivering a unique advantage compared to several other twin EDF jets in the marketplace.

The MiG-29's Archer missile was a deadly threat to opponents in close-in dogfights. A complete scale ordnance package and removable pylons is included with every Freewing MiG-29.