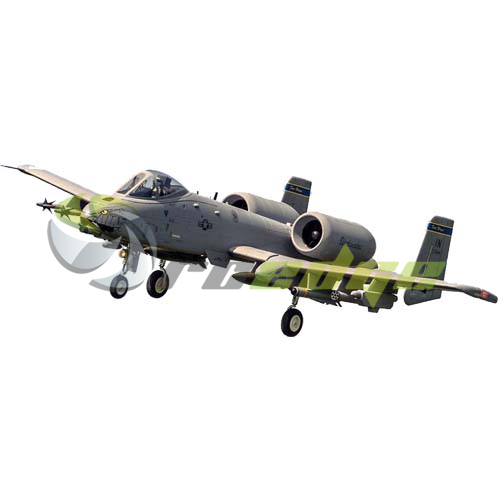 Renowned by its crews and the men and women it has protected on the ground for decades, the A-10 Thunderbolt II, affectionately called the ‘Warthog’, continues to dominate the skies on CAS missions in conflict areas around the world. Despite first flying over 40 years ago, the A-10’s superior ability to execute its intended mission in modern warfare remains unchallenged.

To honor this iconic aircraft we are very proud to announce the world’s largest and most definitive foam electric PNP A-10 Thunderbolt RC model aircraft in the world! Powered by twin 80mm EDFs, this 1700mm wingspan beast is larger than any other foam A-10 on the market, yet it remains easy to transport. The Freewing 80mm A-10 delivers the best balance between size, weight, thrust, top speed, stall speed, transportability, rough grass handling, and overall scale fidelity. As an added bonus we've included a full complement of highly detailed weapons in the box; a $50 value!

The model is assembled from just ten main parts. Removable wings and a convenient flexible servo wire harness accessible at the wing root ensures a safe and reliable electronic connection at all times. The A-10’s wings are composed of hollow chambered foam with an interlocking matrix of plywood ribs, carbon square spars, and aluminum blocks, providing rigid yet supple handling.

The Freewing 80mm A-10 was specifically designed to be the most grass-capable PNP EDF on the market. While sporting a scale Oleo nose strut, the main struts are tensioned trailing links and the foam rubber tires are over 3” tall and 1” wide. In the air, the A-10’s all-new power system delivers a fully scale flight profile. Tall vertical loops, hard “jinking” turns, stable slow flight, and authoritative power. Critically, this model was designed to fly at all throttle points, both upright and inverted, without pitch sensitivity.

As a semi-scale model, the Freewing 80mm A-10 is finished from the factory in USAF two tone gray. A waterslide decal set with over 50 utility markings and three complete A-10 liveries, is included for the pilot to customize his or her A-10. These decals proudly represent Indiana’s 163rd Fighter Squadron “Blacksnakes”, Louisiana’s 47th Fighter Squadron “Termites” and Georgia’s 23rd Fighter Group “Flying Tigers.”  (Artwork courtesy of Boom and Zoom Graphics).