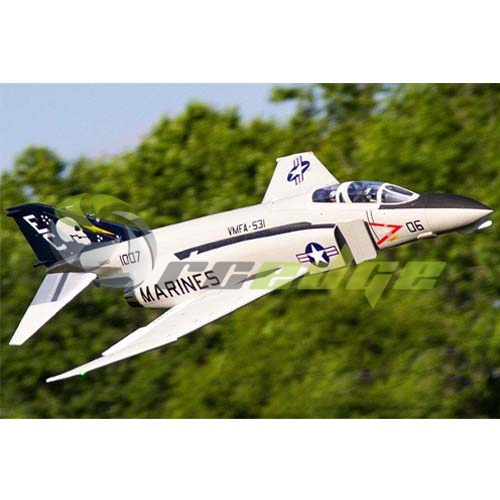 Version Info: This is the ARF+ version for pilots who wish to install their own power system. All primary electronics including servos and landing gear retracts come pre-installed, just add your own power system (EDF, motor, and ESC) to begin flying.

Aviation enthusiasts have long loved the F-4 Phantom, and Freewing and Motion RC are extremely proud to introduce our 90mm Super Scale Series rendition of this ultimate warfighter!  For more than 50 years, the F-4 Phantom delivered the versatile capabilities required of an all-weather frontline supersonic interceptor, fighter-bomber, SEAD, and reconnaissance platform. Less than a year after its retirement from US military service, you can still keep the F-4 Phantom flying in your RC fleet!

This limited edition “Ghost Grey” version honors two distinguished men in our customer family, General Keith “Shadow” Stalder who flew BuNos 061007 as part of US Marines Squadron VMFA-531 “Grey Ghosts”, and Robert “Hoot” Gibson who flew with the US Navy’s VF-111 “Sundowners” aboard the USS Coral Sea in 1972-1974. A detailed waterslide decal set is included depicting both pilot’s aircraft, and we are grateful for their input to help us ensure these decals’ accuracy!

RC pilots have consistently requested a large F-4 EDF jet that performs excellently out of the box without endless modifications. We developed this F-4 to deliver reliability, durability, and performance from your very first flight.  Grass operation is a hallmark of the Freewing 90mm F-4. With its wide stance, tall main tires, Oleo suspension nose strut and concealed trailing link suspension main struts, this aircraft performs well on rougher grass fields.

The Freewing 90mm F-4 Phantom II is available in two power system versions.  The Standard version requires a 6S 5000-6000 mAh LiPo battery, and is our top recommendation to pilots seeking the best balance between speed, thrust, and cost. The High Performance version requires an 8S 5000 mAh LiPo battery, and delivers increased vertical climbing performance and acceleration. The High Performance version is recommended for Advanced pilots only due to the aircraft’s higher speed envelope and heavier flying characteristics.