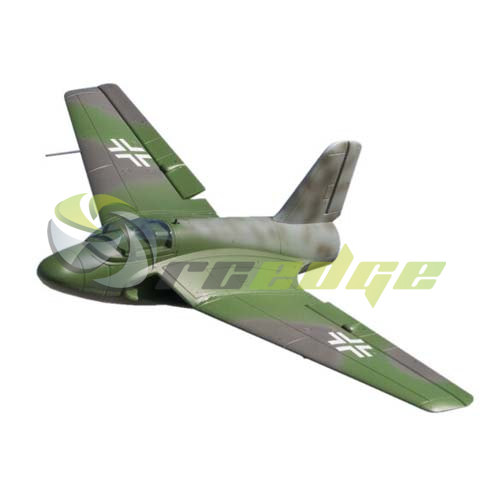 Note that this item is not currently in stock, however you can pre-order it, stock is on it's way and we are expecting it to arrive in South Africa +/- 1st week of August. Purchasing this item now will ensure that you receive one from our shipment. Should you want to cancel this order a 10% handling fee will be charged.

The Wright Brothers, Kelly Johnson, Willy Messerschmitt, Igor Sikorsky, R.J. Mitchell, Burt Rutan.  Not every contributor to aviation history has enjoyed the same notoriety as these innovators, but Motion RC and Freewing are proud to celebrate the engineer Alexander Lippisch, by producing the world’s first and only Lippisch P.15 flying wing concept jet!  Envisioned by Lippisch in 1944 as a jet powered version of his innovative rocket propelled Me-163 Komet, the P.15 would have taken the Komet concept even further, utilizing a blend of all-new and reused parts from the He-162 and Bf-109.  Repurposing the Bf-109’s landing gear allowed the P.15 to take off and land conventionally, compared to the rocket sled and skid landed Me-163.  Optimized for affordability and easy flight behavior, our intent in developing Freewing’s 64mm ParkJet series also seeks to illuminate rare and overlooked aircraft, and the P.15 is our first in this effort!  Join us in celebrating Alexander Lippisch and his innovative P.15 flying wing!

The Freewing 64mm P.15 continues the ParkJet series following the incredibly popular F-8 Crusader and F-105 Thunderchief.  After two American fighter jets, we’re changing things up to spotlight the excellent characteristics of an Axis-designed flying wing from the Second World War.  Compared to the F-8 and F-105, the P.15 is even more stable, more potentially acrobatic, and more efficient.  In ideal conditions, its low wing loading can allow for 50% longer flight times on the same battery with throttle management.  Aside from having a very low stall speed which will appeal to beginner pilots looking to fly slower and learn to fly an EDF, the P.15 also has lots of high speed potential for advanced pilots who are more comfortable with lighting fast rolls, snaps, and tumbles!  The cockpit has even been designed to accommodate a micro FPV camera, or for recording your flight with a standalone camera such as the RunCam or Mobius.  We are thrilled with the wide flight envelope of this model and its perfect marriage balancing fidelity to a scale jet’s appearance and an RC flying wing’s all-around “easy factor”.

For novice pilots wanting to learn how an EDF jet handles versus a propeller driven model aircraft of a similar size, the Freewing 64mm P.15 makes an ideal first hand launch EDF.  Assembly is straightforward, and uses only two servos to minimize weight, complexity, and cost.  Like the F-8 Crusader and F-105D Thunderchief, the Lippisch P.15 is is configured to be flown using a radio that supports Elevon mixing.  The battery bay can also accommodate a small gyro for additional stabilization.  We recommend the manual’s Low Rate throws for your maiden flight.  The roll rate can be very quick on High Rate, so the contrast between the light gray underside and the dark green camouflage upperside helps with orientation!

The Lippisch P.15 has never been modeled in foam PNP before, and we know you’ll be as pleased as we are with how this model flies.  Own this rare model today!